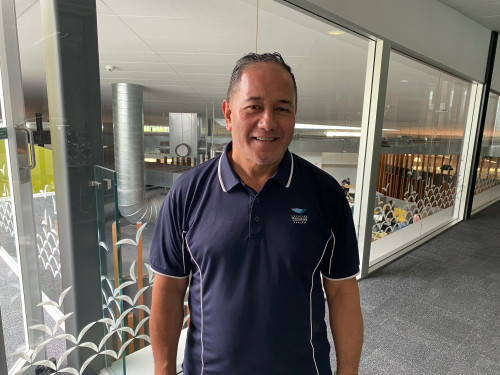 Latest News 18 February | A friendly face with a bit of banter travels throughout Middlemore Hospital as mailroom clerk Jack Tutuvanu delivers the daily mail to staff on his hospital rounds. He never misses a moment to put a smile on someone’s face.

“Sometimes when I see people making something in the kitchenette, I say ‘oh are you making me a coffee’,” Jack jokingly says.

“Sometimes when I see people walking around looking really down, I’ll say to them ‘you look deep in thought’ and they’ll go ‘oh yeah’. I’ll say ‘oh thinking about your boyfriend/girlfriend’ and they’ll go ‘no! I wish!’. It’s an icebreaker and makes them laugh.”

A familiar face to many who work at the hospital, Jack has been a mailroom clerk since late 1996; previously a cleaner, then an orderly since he first started at Counties Manukau Health (CM Health) in 1994. Being a mailroom clerk is more than just delivering everyone’s mail.

“Everyone thinks that’s an easy job, but pushing a trolley and delivering mail is just one part of the job,” he says.

“There are four of us. We do photocopying, binding books, make-up pamphlets, laminate documents, as well as sort all the mail coming in and going out. Back when I started, all the photocopying was black and white; staff would have to bring down the hard copy. A lot of things were done manually back then. When we first came into the mailroom, no one knew how to use computers. We had to train and learn the basics.”

The uniform was also very different from the blue polo shirts worn today.

“Back in the day we used to wear white and so did the nurses, orderlies and cleaners. The men wore white pants, shirt and shoes. After we finished work, if we went out somewhere like the dairy, people would say, ‘oh, you look like you’re going to go play cricket’.”

Over the years, Jack recalls having chats with staff while doing his rounds, in particular with one of the previous CEOs at CM Health.

“He would talk to me about rugby and the Warriors. One time I was walking along the corridor, he’ll be talking to a lot of doctors and consultants, next thing I hear, ‘hello Jack! How about those Warriors – aren’t they useless!’. He had all these important people around him, but he still took the time to talk to me. He was really down to earth. I got to know all the CEOs pretty well. They always say hello to me.”

Jack spent his early years in Ponsonby before his whaanau moved to Otara where his grandparents brought him up with two of his siblings.

“My granddad passed away when I was young, so the three of us were brought up by my grandmother. My mother remarried and had more kids. I carry my granddad’s surname – Tutuvanu. He gave me the name Jack,” he says.

“My birth name is Visesio, it means Vincent in Samoan, but I’ve always been known as Jack. My granddad’s cousin was going to America to become a priest, but he never became a priest, so he named me after that cousin. The name stuck. I had to go to Internal Affairs and change my name legally to Jack Visesio Tutuvanu as I’ve been known as Jack since day dot.”

Now a grandfather of six with four grown-up children, Jack has no plans to slow down.

“It’s the people that make this job; we get to know staff really well. At the end of the day, when you see so many sick people and sick kids, I can walk out and say to my colleagues, ‘see you tomorrow’. I always count my blessings.”

17 days ago Less than a minute to read Communications Team