Safe Use of Opiods

Opioid medications, such as morphine, are beneficial for pain management, but can cause side effects, such as constipation, with resulting distress for patients, and serious harm, such as ventilatory impairment, when given in high doses or in patients who are at higher risk.

Opioid-related adverse drug events also impose significant costs on the healthcare system, due to the need to manage the adverse events and prolong hospital stays for patients who experience harm.

What are we trying to achieve?

Our goal is to ensure that we provide consistently safe and high-quality patient and whaanau care with opioid medications and health equity for our community.

What have we done?

The findings from the second quarter of opioid QSM data (January to March 2019) are due to be published by the HQSC on 28 June 2019In 2014, the NZ Health Quality and Safety Commission (HQSC) initiated the Safe Use of Opioids National Collaborative. At that time, we identified that 40% of adult elective surgical inpatients on opioids at Manukau Surgery Centre had opioid-induced constipation. By developing, testing and implementing a care bundle of resources and processes, we reduced the opioid-induced constipation rate at the centre to 11% by June 2016. We subsequently spread the improvement across the Middlemore Hospital wards.

Over the past year, the focus has been on using the HQSC’s Opioid Quality and Safety Markers (QSMs) within Surgical Services to track the rates of opioid-associated patient harm.

The QSMs, and associated monitoring parameters, are:

Since October 2018, the opioid QSM audit data is being reported to the HQSC on a quarterly basis. The HQSC is also collecting age, gender and ethnicity information, along with the opioid QSM data to help with determining if inequities exist between population groups, and whether or not the improvement activities reduce those inequities over time.

What did we find?

A total of 10 patients’ clinical notes are reviewed per week from across the surgical wards, using the Pain and Opioid Care Compass audit tool. The resulting opioid QSM data is subsequently submitted to the HQSC. The audit findings to June 2019 are shown in the graphs below. 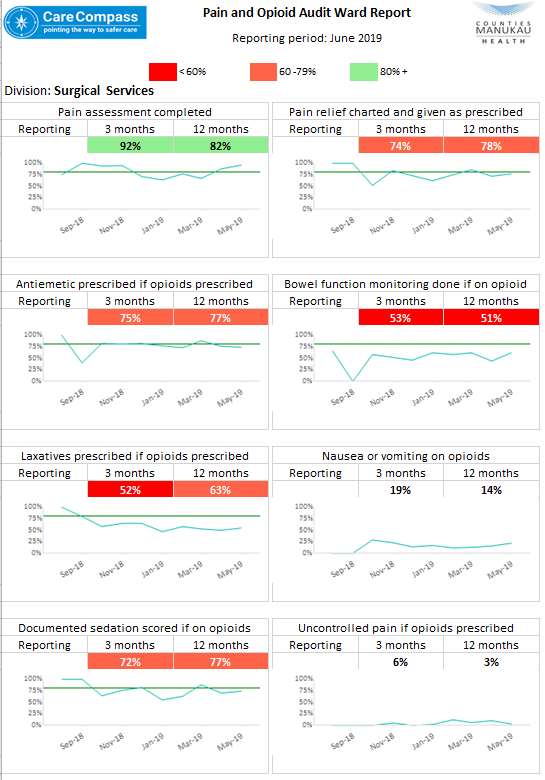 The findings from the first quarter of opioid QSM data submitted to the HQSC (October to December 2018), as shown in the graphs below, show that: 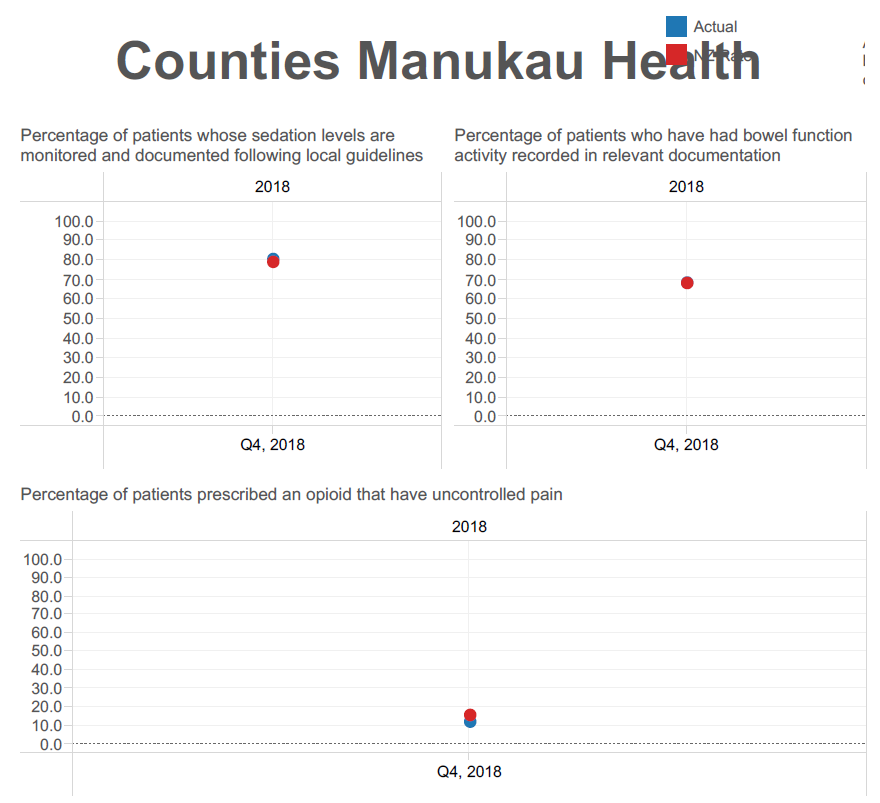 How did we make a difference?

The Opioid Care Compass data provides the surgical wards with feedback regarding the safety and quality of care for patients on opioids. The data indicates that we are making a difference, but there is still scope for improvement, particularly with regards to bowel monitoring and the co-prescribing of laxatives with opioids.

Once eVitals and MedChart have been implemented in all surgical wards, the rates of bowel monitoring and laxative co-prescribing with opioids can be expected to improve.

Where to from here?