The incidence of cervical cancer among Maaori, Pacific and Asian women remains higher than that among European and Other ethnicities. One of the primary reasons for this is lower rates of screening coverage among these groups. There are many barriers for women attending their cervical smear, including embarrassment, shyness, cost, fear (for example, of cancer, pain or discomfort), lack of knowledge or understanding about the programme, and not knowing what to expect. The cervical screening programme is not free for most participants.

The Ministry of Health’s target for participation in the National Cervical Screening Programme is 80 percent. Total coverage for CM Health, as at 30 June 2019, was:

What are we trying to achieve?

Our goals are to achieve 80 percent participation of eligible women in the National Cervical Screening Programme, with equitable coverage across all ethnicities.

What have we done?

The CM Health high-needs cervical screening coordinator and the Support to Screening team are focused on improving communication, collaboration and coordination of activities across the district and region, to improve coverage rates for women in the priority groups. Many of their activities integrate with promotion activities for the BreastScreen programme, thereby providing a more holistic model of care.

Key activities include to following.

Providing free smears in community clinics in areas where priority women reside, and coordinating clinics that are co-located with the BreastScreen mobile unit.

What did we find?

Unfortunately we are seeing a decrease in coverage across all population groups. 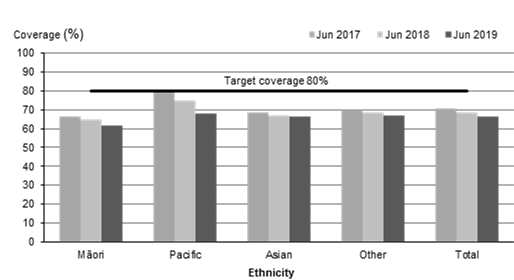 While coverage has decreased, the PHOs have noted that there is:

There has also been positive feedback from the practices that are referring priority women to CM Health’s Screening Support service for follow up and screening. Very positive feedback is also regularly received from Maaori women attending Mana Wahine days.

How did we make a difference?

Where to from here?

In addition to the strategies already implemented, the following strategies are planned for the 2019/2020 year.